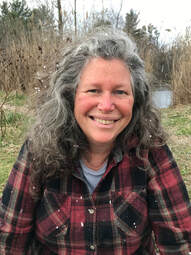 Syndallas grew up on the water and in the forests of Michigan and Florida and earned a B.S. in Biology at University of Michigan and M.S. Ecology and Evolutionary Biology at the University of California, Irvine. Along the way she’s camped and studied plants and pollinators in the Siskiyous in S.W. Oregon, swamps, forests and fields of Michigan, Kauai, coastal and desert California, and the California Sierra Nevada.  She taught at El Cerrito Preschool Cooperative, learning from wise and loving mentors to step back and follow and support kids’ ideas. At Wildcat Community Free School she followed kids through creeks and forests, set up experiments, supervised the use of power tools, knives and fire, facilitated democratic decision making and mediated a lot of arguments about Pokemon Card trades. She’s planted native gardens with preschoolers to high school students, and has camped all over the U.S.A. with her two teenage sons.

Syndallas spent much of the past decade at an automotive manufacturing plant where her responsibilities included developing accountable health and safety systems with teams of union leaders, production operators and supervision.  She recently served on a Michigan State working group developing guidance for community centers and public events around COVID safety.  She participates in consensus decision making with her neighbors at home at Great Oak Cohousing Community. The beautiful wild world is the place Syndallas wants to be! She loves sharing nature connection with people and other living things and you!
Fonsea Bagchi 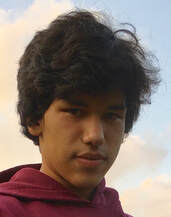 Fonsea (He/Him/His) grew up in Ann Arbor, Michigan.  Mostly you can find him zooming school at Huron High, walking PawPaw Goldenheart (his dog), and running and walking in all weather - trail running, town running, cross country and track and mega-walks (a word he made up with friends). It only rains on the other guys! He loves wandering in the woods, by the river, in the UP, by Lake Michigan, in the desert, and also canoe camping, getting lost in the mountains, checking dumpsters for racoons and possums. He basically loves being anywhere outdoors unless there are swarms of vicious bitey flies!

Fonsea lives at Great Oak Cohousing sharing in community work, including childcare, cleaning, and grocery shopping for neighbors. He loves music and plays the French Horn in band and (kind of) the piano.  He likes to create and share music and enjoys its connection to nature. He’s very excited to work as an assistant teacher at Nature Learning Community, he hopes to help kids find their own love and appreciation of nature.  He’s been camping since he was very young.  He loves nature and nature loves him! 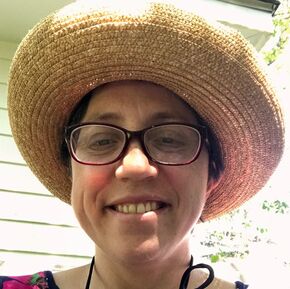 Eva has been teaching camps, classes and after school programs for seventeen years. She graduated from the Rudolf Steiner School of Ann Arbor in 2001. She studied art at Earlham College and earned a visual arts teaching certification from Eastern Michigan University. She recently, finished a forest and nature school training for early childhood educators. And she is a parent to her son Yonah who is four.
Eva integrates children’s passions into the learning. She’s interested in cultivating mindful awareness of plants, animals and humans.  She encourages children to be free spirits working in community. She seeks to bring the eight directions into her teaching creating rhythm and balance in her classes. She opens her heart to emotionally support each child and warmly hold the group.

​​Ali Vogt was born in the Adirondacks, and spent her childhood summers outdoors in northern Michigan. As a young adult, she reflected on her lifelong interest and passion for the natural world and realized how deep an impact her early experiences had had on her values, as well as her feeling of connection and belonging in nature. She knew she wanted to work in early childhood education to facilitate those opportunities for children as well.

While teaching in a Montessori preschool program, she discovered nature preschools and forest kindergartens. She attended the Nature Preschool Institute at Chippewa Nature Center in 2016, and proceeded to develop and run a nature-based summer program for several years. She participated in the Michigan Master Naturalist program, as well as the Nature-Based Teacher Certification through ERAFANS, and is also a Kamana student. Ali completed her Permaculture Design Certificate in 2017 at Earthaven Ecovillage, she volunteers with Southeast Michigan Land Conservancy, and is certified in CPR/AED/First Aid. Her other interests include gardening, pottery, baking, hiking, and creating with her hands. 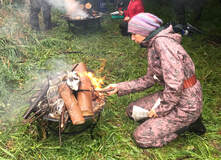 Seven (they/he) grew (and is growing!) up in Ann Arbor, where he currently attends both Community and Pioneer High schools. They play trumpet in Pioneer’s band, and have a love-hate relationship with the triangles in math. They like all his classes, but like being in nature more! Feeling the crisp winter wind beats sitting in a classroom any day. Over the summer, Seven goes to Northwaters and Langskib, a wilderness canoe tripping camp in Canada. There, he learned to appreciate that beauty is always all around us, and the mundane things we take for granted might just be more interesting than they seem at first glance. They like to learn and meet new people, and are fascinated by - and loves to listen to - stories, especially the true ones. In his free time, Seven likes to write, read (way too much, mostly fiction), draw, bike, explore, listen to and play music, and make plans for the future. They’re excited for this opportunity to share time outdoors with all you wonderful people!

Alix Gaither is currently enrolled in a Master of Science program in Curriculum and Instruction.  She also holds an A.A.S. in Early Childhood Education from Delaware County Community College and a B.S. in Human Development and Family Studies from Arizona State University.

Alix has over ten years of experience working in toddler, preschool, and elementary classrooms across the country with both neurotypical and neurodivergent children, as well as three years spent teaching ESL in Japan. With a background in Montessori education, she’s also a certified trauma and resilience practitioner, trained in anti-bias education and restorative practices for the classroom, and a certified children's yoga instructor.

Alix is originally from the Philadelphia, PA area and is married to her high school sweetheart. Together they have one son and live in Ann Arbor. In her free time, Alix enjoys reading, spending time outside, traveling, and taking photos. The foundation of her nature connection is water, and she’s happiest next to (or in) natural bodies of water. 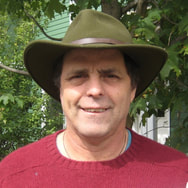 Chuck Barbieri spent his childhood on Long Island, NY, very close to the ocean. Outside adventures in woods, swamps and ocean beaches were important daily aspect of his life as a child. As woods and nature areas were converted to parking lots and highways on Long Island he chose a college near abundant natural features. At Willamette University in Salem, Oregon, he majored in Environmental Studies and Biology. Chuck traveled extensively in the Pacific Northwest, took some Outward Bound classes, and went to graduate school at University of Michigan School of Natural Resources and Environment, majoring in Environmental Advocacy and Education. He enjoys “rock hounding” across the United States, doing nature art projects and simply sitting and walking in the woods, aimless and joyful. He's taught in many Waldorf schools as the kindergarten afternoon teacher and after-school director. He also directed many successful summer camps.